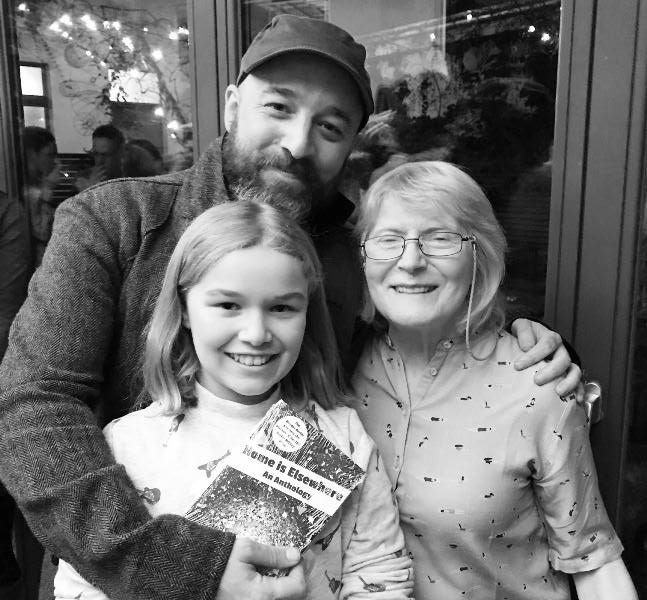 Dolores Walshe won the 2017 Berlin Writing Prize for her short story ‘The Wooden Box’. She stayed at The Circus Hotel for one-month in January/February 2018. During her stay she was also a guest at The British Council Seminar, and read (together with runners up Alissa Jones Nelson and Jodie Noel Vinson) during the launch of the ‘Home is Elsewhere’ Anthology. We talked to her about her experience with The Berlin Writing Prize, her stay at The Circus Hotel and her life since.

How did you feel when you received the news you had won the 2017 Berlin Writing Prize?

I was absolutely bowled over by winning the 2017 Berlin Writing Prize, in fact I was thrilled to have made it to the short-list of several brilliant writers and truly never expected to win the actual award. I was on cloud nine for days, in fact, cloud nine could have flown me from Ireland to Berlin instantly, without my actually having to book an airline ticket! I wear the award as a badge of honour on my C.V. and am ever grateful for the enthusiasm, time and attention given to the submitted stories by a very dedicated team of adjudicators led by Victoria.

Had you been to Berlin before? How trepidatious were you before you arrived?

I had never been to Berlin before winning the prize, and while I’d won some residencies in an artists’ retreat here in Ireland, I’d never been on one abroad before, in a situation where I wouldn’t be mixing with other writers and artists. Plus, in the past I’d always divided up my residency time into blocks of two weeks, rather than taking a full month in one go. So, though I was excited, I didn’t know quite what to expect of the residency, or myself!

What were your first impressions of The Circus and the apartment you won for a month as your prize?

The Circus Hotel truly became home for me for the month I was there. Katrin, the manager, and her wonderful staff made me so welcome, and I have such fond memories of them all. The apartment was magnificent, spacious, many-windowed, tucked away up on the second floor at the back of the little courtyard with its water feature. I felt like I’d finally got to be the “artist in the garret” that I never had the freedom to be, when I was much younger!

How did you experience your one-month residency? We know Berlin can be distracting! What did you do during your time at The Circus Hotel?

There is a neon sign on one of the hotel’s walls which says “Hier und Jetzt..” I used to look out of my apartment window at it and think, yes, I’m truly in the here and now, I’ve been given the invaluable gift of time, and a beautiful sheltering space in which to use that time for my writing. I was determined to live up to what the Berlin Writing Prize and the Circus Hotel residency were offering me, and the “Hier und Jetzt” of it actually surprised me by nudging me towards an old novel I’d written twenty years back, a novel that needed to be filleted and re-written. That is the task I began in that wonderful apartment in The Circus.

Of course The Circus being in such a vibrant part of Berlin as Mitte, proved a terrific distraction when I needed to walk and clear my head. The hotel’s own “Behind the Curtain” events, introduced me quickly to so much of the city, but my favorite event was their after-hours, private night-time tour of the Natural History Museum, a magical experience and one that still lives in my imagination.

What kind of year have you had since the residency?

It is just over a year now since I finished the residency and I’ve spent that year continuing the work I began in The Circus, re-writing and editing the entire novel. I’ve also written a short story set in Berlin. This is the first time in a long time that I’ve done such a sustained bout of writing, and it is thanks to the discipline I achieved on the residency. I gave up entering competitions while I worked on the novel, though I did win an arts award for facilitating creative writing workshops and editing a booklet of writings by an intercultural group with members from countries such as Syria, Kurdistan and Nigeria, a hugely humbling and rewarding experience.

I’ve begun the task of sending the novel out to agents and publishers. While I’ve had no luck yet, the quality of my rejections has improved radically, so I live in hope! And I bear in mind Samuel Beckett’s words: “Ever tried. Ever failed. No matter. Try again. Fail again. Fail better.”

Do you have any advice for the winner of the 2019 Berlin Writing Prize?

I wish the winner of the 2019 Berlin Writing Prize every writing success possible, and a productive residency at The Circus. And I hope she/he manages to strike a good balance between the wonderful distractions of Berlin and the wonder of the work in hand. Congratulations and happy writing!

Read more and enter on the 2019 Berlin Writing Prize here.