The Reader Berlin, The Circus Hotel, and SAND Journal present…

We’re delighted to finally be able to announce the winners of this year’s prize. With a stunning short list, making the final decision was far from easy. However, after much discussion, our judges’ decision was unanimous. Without further ado, here goes …

Dolores Walshe will be undertaking the residency in Berlin at The Circus Hotel, while our 2 runners up win 2-nights’ accommodation at The Circus Hotel over the weekend of our prize-giving and anthology launch party on February 17th, 2018. The remaining 7 writers will be receiving Reader Berlin goody bags and all of our ten shortlisted authors will be published in an anthology. We’ll be keeping you posted about the event and anthology, and hope to celebrate with you in February. Preceding the publication of the anthology, we’ll be publishing excerpts from the shortlist online, and of course SAND Journal will be publishing Dolores’ winning entry in their autumn edition. You can keep up with all the news and our forthcoming courses and events by signing up to our mailing list here. Scroll down for more about the competition and the full long list and honourable mentions.

Thank again to everyone who entered, our judges, partners and sponsors, and hearty congratulations to our winners. 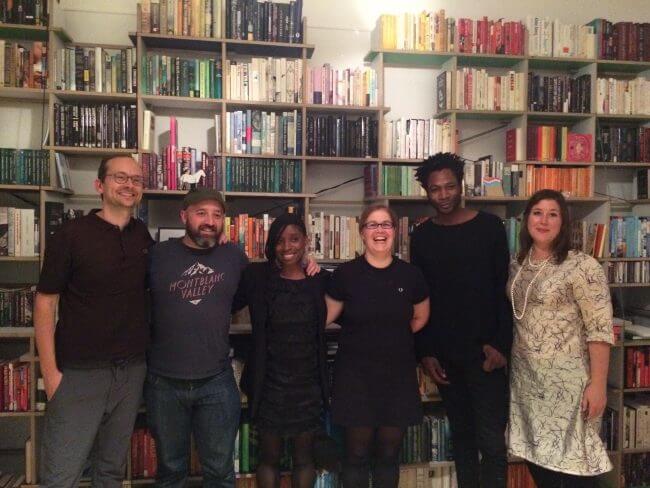 It is with great pleasure that we can finally announce the 10 entries shortlisted for this year’s 2017 Berlin Writing Prize.

On Tuesday night, judges Irenosen Okojie, Katrin Schönig, Florian Duijsens, Paul Scraton and Michael Salu met in Pankow, Berlin, to decide which writers from the long list would make the final cut. The discussion went on long into the night, but brilliant, delicious catering from Berlin’s Wolf & Peter kept energy levels up while the judges inched towards a decision. With such a high standard of entries, it was no easy matter. We’d like to thank them for their hard work and the seriousness with which they undertook their task.

We’ll be announcing the winning writer and two runners up before the end of the month, but for now, in alphabetical order, we are immensely proud to reveal the 2017 short list!

Thanks to everyone who entered this year’s competition. We had more entries than ever before – many more, in fact. Not only was the standard high, but entries flew in from every corner of the globe. We want more writers in Berlin, and it seems you want to be here too. I only wish we could take over the whole of The Circus Hotel, stuff it with writers on every floor from top to bottom, pencils scattered across the floor, paper floating down the corridors, laptops buzzing from every flat surface. But we only have that one month in one apartment to give away. Traurig!

We promised a long list of 25 writers. What you have here is a long list of 29 writers, plus 11 honourable mentions. That was as far as we could go. The long list is now with our judges who will be reading every entry carefully before they meet in September to pick an overall winner, two runners up and a further seven short-listed writers. And the honourable mentions? Those are the pieces that have been eliminated but which really hurt to cut, or were the cause of vicious fallings out amongst our team of readers. There were more – and their voices will be floating around in my head for a very long time to come. ‘He’s probably out there right now, stealing the cutlery!’

I can’t emphasise enough that amongst the work that did not make our long list are stories by writers who arguably deserved a place (and we did argue, believe me), writers who showed enormous promise, even if the piece they entered didn’t quite sustain the flashes of brilliance quite long enough.

You may wonder why we haven’t published the long-listed authors’ names yet. That’s because we want to keep things anonymous until all the judging is over. We will, of course, be adding the names as soon as it’s finished.

Well, here it is. Thank you for sending us your work.

Been Fighting Since – K Chess

I am Rebecca – Meiko Ko

I feel at home everywhere but my home – Leila Segal

In the Body of Moths – Pia Ghosh Roy

The Jinns of the Windward Side – Selma Cardoso

Voice of the soil – Dan Lockton

What I lost in the Fire – Shannon Kernaghan

When the House is Finished – Zaia Alexander

Sister Sarya at the End of the World – Gerard McKeown

Please, At Least Let Me Hold You – Jacob Jones

My Mother In Snow – Divya Ghelani

Original competition text: The Reader Berlin’s fourth annual writing competition is now open. And this year, we’re offering our biggest prize yet, a one-month residency at The Circus Hotel, Berlin!

Virginia Woolf said that ‘a room of one’s own’ was prerequisite to producing good writing. In 2017, The Circus Hotel is generously offering the winner of our writing competition their own luxury apartment in the heart of Berlin for a one-month residency in early 2018. There, the winning writer will have undisturbed time to observe, explore, and write in one of the world’s most inspiring cities.

Until the closing date of July 31, 2017, we invite submissions on the theme ”Home is Elsewhere” from both published and unpublished writers resident anywhere in the world. Our aim is to promote fresh, original writing and provide a platform for emerging writing talent. This year’s judges include award-winning author Irenosen Okojie, author and creative director Michael Salu, SAND editor Florian Duijsens, writer and publisher Paul Scraton, and The Circus Hotel’s own Katrin Schönig.

Results will be announced on October 1, 2017 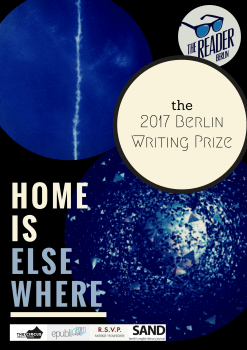 Winner: A one-month (four-week) residency at Berlin’s The Circus Hotel to take place from January 22 to February 18, 2018. The competition winner will receive their very own apartment, plus a month’s worth of breakfast vouchers for the Circus Hostel and up to 100 euros in travel costs to help cover their travel to Berlin. The winning entry will be published in SAND Journal (subject to the magazine’s regular editing and copy-editing) and in a Reader Berlin anthology.

Along with this, The British Council has generously offered  the winner a free place as a delegate at the British Council Literature Seminar 2018 in Berlin, due to take place over three days during the residency. The seminar, in its 33rd year, offers students, academics, publishers, translators, journalists and literature fans the chance to hear the latest writing from the UK and engage with the writers and their work at first hand. Over the years, the list of writers taking part has included Ian McEwan, A S Byatt, Salman Rushdie, Jeanette Winterson and David Nicholls…as well as Berlin Writing Prize judge Irenosen Okojie. In 2017, the live stream of the seminar was watched in 72 countries.

Runners Up: Two runners up will receive two nights in a double room of their own at The Circus Hotel over February’s competition prize-giving event on February 17th, and a travel budget to a maximum of 100 euros each to cover their journey to Berlin. Their winning entries will be published in a Reader Berlin anthology.

Shortlist: A further seven shortlisted writers will win Reader Berlin goodie bags, plus invitations to our prize-giving event in February 2018. Their winning entries will be published on The Reader Berlin’s website and in the anthology.

All submissions will be read by The Reader’s team, which will compile a longlist to be read by our panel of judges.

Irenosen Okojie is a writer and Arts Project Manager and author of Speak Gigantular and Butterfly Fish, which won a Betty Trask award. Her work has been featured in The Observer, The Guardian, the BBC, and the Huffington Post. Hailed by Ben Okri as a dynamic writing talent to watch and featured in the Evening Standard Magazine, she is one of London’s most exciting new authors. Find her at www.irenosenokojie.com and @IrenosenOkojie.

Katrin Schönig is the general manager of the Circus Hotel in Berlin. A long time lover of literature, Katrin has a Master’s degree in English and German Literature and is the events coordinator for Elsewhere: A Journal of Place. Her favourite writers include Erich Kästner, Klaus Mann, Jane Austen, Brigitte Reimann, and Carson McCullers.

Florian Duijsens is the fiction editor at SAND Journal and co-host of the bimonthly Dead Ladies Show at ACUD. He works as a writer, editor, and translator (most recently of Hanna Bervoets’ Everything There Was), and teaches in the “Language & Thinking” program at Bard College Berlin.

Paul Scraton is a writer and editor based in Berlin. Born in Lancashire, he moved to the German capital in 2001 where he has lived ever since. He is the editor-in-chief of Elsewhere: A Journal of Place and the author of Ghosts on the Shore: Travels along the German Baltic Coast (Influx Press, 2017). Website: www.underagreysky.com.

Michael Salu is a writer, award-winning creative director, critic, and artist. His fiction, non-fiction, and art have appeared in a range of publications including Tales of Two Cities, Freeman’s Journal, and Catapult.co. Salu runs a multi-disciplinary creative consultancy, SALU.io, and is currently finishing a collection of stories and working on two film projects. He is the former creative director of Granta Publications.