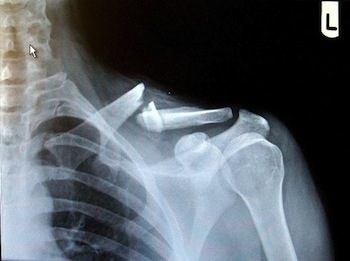 I cannot be here because I am lying in the middle of a tiny road in rural France. It is dusk. My bicycle lies beside me. I’ve a broken collarbone, cracked ribs, shock, a phone that can’t tell me where I am and a fine view of the Alps as the sun sinks and the temperature drops and absolutely no cars go past.

A Form of Chinese Whispers (of Sorts) by Ambika Thompson

You tell someone something and then immediately regret it...

From our Festival: GORGAST by Lee Holt

I’m the kind of person who researches the hell out of things, so when I decided to come to this event, I wanted to know everything I could about Fort Gorgast. I read up on its nineteenth-century construction, its obsolescence in military terms in the face of advancing technology, and its eventual occupation by the Red Army in the closing days of the Second World War. I was struck though by the lack of history right after the fort’s construction, so I kept digging. I live in Potsdam, where the Institute for Military Research is located, and I spent some time in the archives a couple of weeks ago. And I found some things that I hesitate to share with you.

From our Festival: THERE IS NO HOPE AND THE NIGHTS ARE COLD by Marcel Krueger

Fort Gorgast is an old Prussian fort, built in 1883 to protect the nearby town of Küstrin (Kostrzyn in Poland today). In its heyday it used to house 160 soldiers, 60 artillerists, canons, horses and equipment in its red brick casemates. However, as fortress development in the 19th century could not keep up with weapons and artillery technology, it was soon outdated and no longer used by the German army.

From our Festival: YOUR HEART’S DESIRE by Victoria Gosling

Welcome to Fort Gorgast and the first of our terrifying tales. It is wonderful that you could all join us. This is the first event at which we have all got together, albeit it in a cold and shadowy tunnel, and while it might be a touch hippy-ish of me, I would like you to do something you may be familiar with from yoga class. I would like you each to set an intention, that is, to make a little wish. Eyes closed everyone. Out goes the torch…wishes done…? And we’re ready.

When they took away Peter’s father he was raving. The end of the world was coming, it was coming soon, and we were all going to die. They knew, but they didn’t want the truth to get out. That’s why he was being silenced, and so on. In response to Mrs Hunter’s emergency call the operator had sent two burly paramedics, but they had not been enough and it had taken an additional four policemen to restrain him.

The Incident – by Kenneth Macleod

The reason my grandfather, Gordon McInnes, felt that everyone should learn to swim was because at the start of the war he was unable to. At that time he was a qualified merchant seaman, and for a poorly-schooled young man from a working-class Glasgowfamily he considered himself, prior to 1939, fortunate in his job. It was secure and well-paid and it showed him people and places he would never otherwise have seen.

Prologue to The Disruptions – Brigid Delaney

The party was in a disused aircraft hangar in a part of town that half way through that violent decade would suddenly become cool, and thus gentrified and expensive. But at the time, on the closing night of the 2000 Olympic Games, it was a choice regarded by many as risky – controversial even.