The Wheel at the Centre by Marcus O’Shea 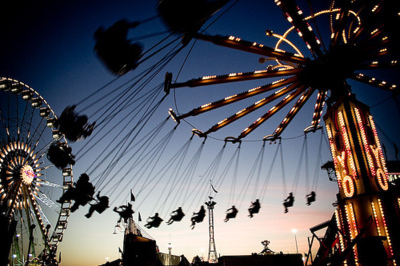 You can smell space, not direct like, you’d die doing that. But you can pick up bits of it from the things that went outside, wafts of recently used space suits or antennas brought in for repair. Away from planets it smells like a metal fire, the twisting girders of burning buildings or a penny you set on the fireplace as a child just to see what would happen. The moon is a recently fired gun, all hot smoke and powder. Mars is a cooling kiln of clay and Venus smells damp and sulphurous. Like the boiled eggs my auntie would make 3 times a day when I had to live with her for a few months, after mum went funny. Auntie was on a strange diet, she always was.

The station on the other hand is fair neutral, the air’s that dry, recycled stuff like you find in the job centres on the East End. Dead and cold enough to catch in your throat sometimes and leave you coughing. The rehydrated food packages just remind me of airline meals. They almost smell appetizing, but there’s that edge of something else, hot foil and and preservatives.

You can catch little bits of those smells at the summer carnival. Slight sniffs hidden under cooking oil and machinery grease, sweat and crushed grass and candy floss. Here and there a bit of Mars off a fairground axle or a hint of the moon after the fireworks. It’s comforting and odd all at once, like the way Stephen holds my hand a little tighter when we pass through big crowds. No one holds your hand up in space, they’re tools up there, things for delicate work and coding equations. No use for comfort in a place so large and dark.

I like the way he squeezes, protective, calming. He knows I’m not yet used to crowds and chaos after all that time near alone. But still, it’s an alien feeling, that warmth on warmth.

He buys me a cone of chips and curry sauce. He remembers all the messages sent back home about how much I craved it. The slight stink of the cheap powder-mix curry brings me back to a moon of Jupiter. To a delicate landing at an unmanned supply station, the slow revolution of the minor body on which we perched like parasites, unique mineral mix like old turmeric. The chips are salty, crispy at the edges and wonderfully soggy where the sauce soaks in. They gave me a little plastic fork but I eat it by hand because my fingers haven’t been sticky with food in so damn long. I rub the grains of salt between thumb and forefinger. NaCl Sodium Chloride like dust from some distant star. The pagans here long ago though it was the purest form of the earth but there’s rocks out there that are almost totally made from it. Any mineral you can think of is out there in some form and it’s only the living that are unique to earth. We’re changing that too of course. Cultivating cross-breeds of mosses on controlled pods in the manned stations. Experimenting with space-borne crops and self enclosed systems. It’s hard work for little gain right now but who knows? Maybe the next generation of astronauts will be snacking on chips and curry sauce fresh from the fryer instead of dehydrated vegetable compounds from a sealed foil sack.

The fireworks go off and I flinch, still not used to loud sounds. A bang up in space means catastrophe, down here it’s a spectacle. Stephen holds my shoulder gently, a peck on the cheek for reassurance. My heart beats irregular, thumping in between the bangs of distant fire. On the station we would watch the telescopic feeds of far-removed galaxies slowly collapsing, balls of flame flaring out or shrinking down, cooling to a dense white dwarf. A catherine wheel spins across the air, shooting sparks in wild orbit. A child shrieks in delight. Stephen is staring up awestruck at the sight, coloured light shifting shadows across his beautiful face with each explosion. I saw a solar system so much like our own in slow collapse, a million year process partially finished, moving too slow for any human life to track its movement. Stephen closes his eyes, smiles gently, perfectly, slight creases by his eyes that I don’t remember from before I left. I haven’t breathed out in at least a minute. When a system dies the planets collapse slowly towards a centre, drawn in by the gravity of the dying sun around which they revolve, returning to a central point. He squeezes my hand tight, almost at the edge of hurting, the exact pressure to clear the block, I bury my face in his shoulder, he runs his hands through my hair. Tells me it’s okay, I’m on the ground, I’m home, I’m with him. I breathe out at last.

I don’t much care for the faster rides. They used to thrill me, but now they feel too much like pale imitations of the chaos of re-entry. Even the most creaking, poorly-kept pendulum ride doesn’t quite compare to the knowledge that a small flaw in your ship’s construction could end in fiery death.

Instead we end up on the Ferris Wheel, a childhood favourite. Stephen has to help me onto the creaking seat. My limbs are still weak, muscles withered from months without the pull of gravity to fight against. My body feels so heavy now I’m back on earth. As if at every moment I’m being dragged down, sinking into the soft dirt beneath me. I used to be the morning person of the pair of us, up just after dawn and out running around the neighbourhood. Since I got back it takes me an hour and two coffees just to get the strength to roll out of bed. By the time I manage to pull myself onto the hard wooden bench of the ride I feel out of breath, a thin sheen of summer sweat beading on my brow. Stephen pulls himself in next to me, puts a hand on my knee. Long delicate fingers, almost flawless. He’s built like a rugby player but he has the hands of an artist.

“Like we’re back in sixth form again.” He says, running his hand up and squeezing my thigh gently.

“Don’t try to cop a feel or I’ll smack you one, dad tol’ me about boys like you.” I joke, still slightly breathless from the exertion. Stephen laughs and kisses me, lips warm and stubble rough against my skin. I’ve missed it so much, this texture to the world, almost nothing smoothed down or sterilised. No sleek chrome, no hi-tech plastic. I grab onto the soft cotton of his shirt, the fabric slightly damp in the heat. His cheeks are red like old stars and there’s no place in the universe that smells as sweet as he tastes.

The ride lurches up, jerking unsteadily as it comes to life. I feel empathy for the old machine, sinews straining under all our weight. We start to rise as the axles creak and moan. I remember the moment after we escaped the atmosphere, when we turned and saw the earth receding behind us. Our home became a blue marble getting smaller every second, so miniscule in the enveloping dark. The carnival is a constellation beneath, a milky way of lights that flow in twisting arms outwards from the centre. We are rising, rising past the pull of earth, the draw of gravity and here I feel so light, so cold. I could float if I wanted to, if I lifted the bar that holds us in place I could just kick away and float up into the smear of stars above and below, the dark and the lights on all sides.

“Alice.” Says a voice from somewhere else.

I want to lift the bar and float away and-

He shakes me back to where I am and I realise how fast I’m breathing, how hard my hard beats in my chest and the painful way my hands are locked rigid on the metal safety bar. Stephen is looking at me, his eyes wide and red at the rims. His hand on my shoulder holds me in place. I feel tears hot and wet roll down my cheeks. He pulls me in close.

I try to match my panicked breath to his. I slow down by degrees, matching the earthy rhythm of his lungs. He breathes like the way soil breathes, like long gusts of wind through trees and leaves.

“I love you.” He whispers, his breath warmer than the air rising from old machines and greasy fryers. He does not say Stay with me but I hear that too, somewhere behind the words.
“I love you.” I say, and mean it, and I don’t say I don’t know how but I wonder if he can hear that behind my words as well.

We pass the slingshot point of the apex and the ferris wheel brings us slowly back to earth. When it stops I almost fall out. My legs sore and shaking as if I’ve run a mile. Stephen puts his arm around my shoulder, steadies me as I keep my legs straight.

“Why don’t we go home?” He asks. I nod in answer and he drops his arm down to hold my hand again.

The lights of the Carnival give out a few metres past the edge of all the hubbub. We cross past the border, absorbed by inky gloom. Out here it’s all dark, no stars to speak of. The car’s parked across the field and as we pick our way across the grass the sounds and smells fade away as well. The stink of metal and frying oil replaced by the soft earthy scent of mud and crushed grass. The slight woody tone of Stephen’s sweat. The clash and rumble of crowds and machines quiet enough now to hear the wind when it picks up. The susurrus of blown grass stems. The sound of boots sinking down in damp earth. Stephen’s breath, somewhere in the dark, slow and calm, set to the rhythms of a summer night.