This November 20th, Berlin’s own Tom Pugh will be joining us  at Galander, Kreuzberg, where the candlelight ushers you in and the whiskey urges you to linger. Tom will be reading from his debut novel ‘The Devil’s Library’ (Crux Press, 2016) which follows two sixteenth-century adventurers on their quest to obtain ancient, heretical texts.Involving the Pope’s spymaster, Ivan the Terrible, and a book believed to have the power to bring about the Apocalypse, The Devil’s Library has been described by critics as a “gripping and atmospheric debut” and a “magnificent achievement.”

Following the reading, we’ll be talking to Tom about his path to publication, a journey which has similar twists, shadowy figures, and an equally satisfying conclusion to his novel. You’ll have the chance to learn about his writing process, the challenges of writing genre fiction, the struggles and joys of research, and the importance of being nice.  Victoria will be putting all the burning questions to Tom, like, ‘How do you bag a book deal these days without friends or family embedded at Penguin?’ And addressing issues such as the contemporary role of the author in PR, sequels, and TV and film rights.

You’ll also have the chance to present your own questions to Tom and to chat to him and fellow writers with a fiery, Galander made, Inferno inspired cocktail in hand. And because, of course, the Devil has the best tunes, there’ll also be live music from pianist and author Polly Trope… 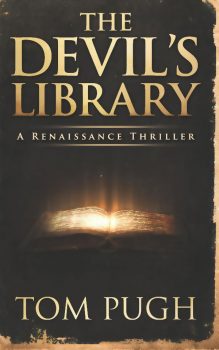 A ‘renaissance thriller’, The Devil’s Library has been selected as a Barnes and Noble Daily Pick, and described by best-selling author Eve Harris as “a gripping, atmospheric debut.” The novel was partly inspired by Tom’s own overland journey from Moscow to Naples.

Tom lives in Berlin with his wife and children. Following a degree in history at Glasgow University, he invented a career for himself as a travelling copywriter and teacher, working in London, Sydney and Tokyo, before finally settling in the German capital. He is still a copywriter, and also hard at work on a sequel to The Devil’s Library.