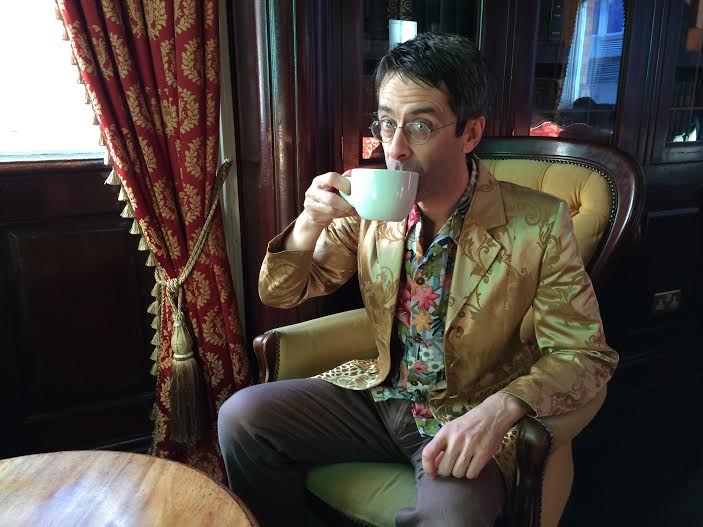 On June 16th, our last Sunday Salon before September, we were in the company of award-winning author and pig thief, Julian Gough. Quite the Renaissance man, Julian once sang in underground pop band Toasted Heretic. He’s published novels, poetry, a children’s book, not to mention writing the ending to Minecraft.

He spoke about the weird differences, and similarities, in writing for five-year-olds (Rabbit’s Bad Habits), and thriller fans (Connect, coming out early 2017). Not only this, Julian shared his thoughts on the writing life and offered some, shall we say, less than standard advice to aspiring authors.

We had live music from  Fabien Leseure who debuted an original composition specially created to inspire the live-writing competition.
If you weren’t able to attend, you can hear Julian’s readings and an excerpt of Fabien’s composition in our edited highlights.

Julian Gough is the author of three acclaimed novels, two BBC radio plays, a successful stage play, and the ending to Time Magazine’s 2011 computer game of the year, Minecraft, which has sold 60 million copies. He also sang with underground literary pop band Toasted Heretic. In 2007, he won the BBC National Short Story Award and was shortlisted for the Everyman Bollinger Wodehouse Prize in 2008, and again in 2011, for his linked novels Jude in Ireland, and Jude in London. In addition to publishing a poetry collection, Free Sex Chocolate, in 2013 he had a UK number one Kindle Single with the comic novella CRASH! In January, he debuted his first children’s book Rabbits Bad Habits. His fourth novel, Connect, will be published in 2017 by Picador (UK) and Doubleday (US). He is probably best known for stealing Will Self’s pig.