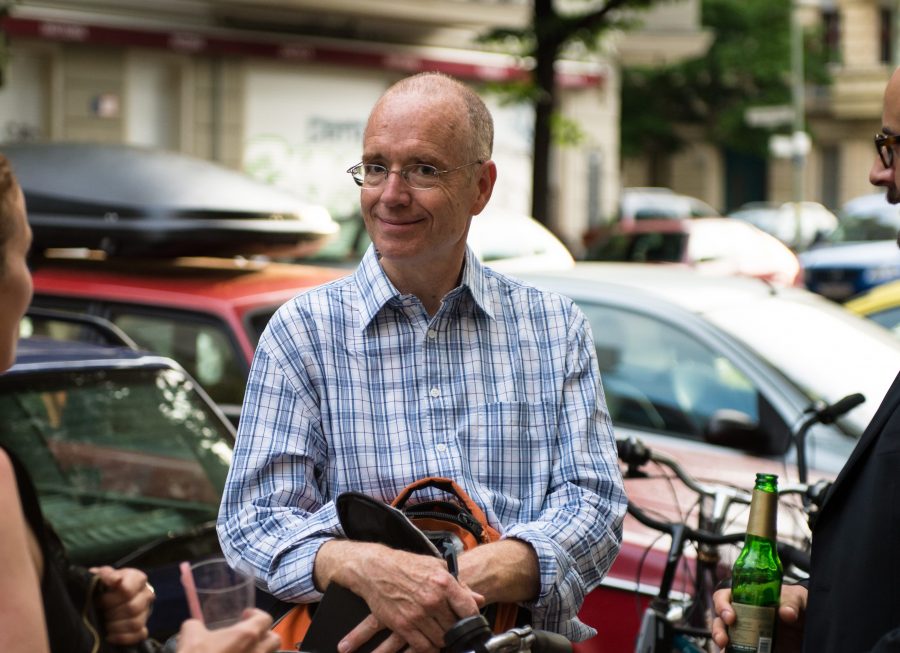 Rory Maclean, ‘one of Britain’s most expressive and adventurous travel writers’ and author of more than a dozen books, including recent bestseller Berlin: Imagine A City, is returning to Berlin this summer.

The Reader tutor and part-time Berliner will be joining Victoria for an intimate, cosy event at The Circus Hotel on Monday June 12th. Join us on Monday June 12th at 7pm, when Rory will be reading from and talking about BERLIN: Imagine a City, as well as his new book Pictures of You. We’ll be asking Rory about his writing process, what inspires him and about all his recent travels. Rory will read from both books and then we’ll invite questions from the audience. You can find more details on our Facebook event page. Please keep an eye on this as we have a choice of two venues depending on the weather.

Cellar bar and library
OR
On the roof terrace if the weather is nice
Circus Hostel
Weinbergsweg 1A,
10119 Berlin

BERLIN is a city of fragments and ghosts, a laboratory of ideas, the fount of both the brightest and darkest designs of history’s most bloody century. The once arrogant capital of Europe was devastated by Allied bombs, divided by a Wall, then reunited and reborn as one of the creative centres of the world. Today it resonates with the echo of lives lived, dreams realized and evils executed. No other city has repeatedly been so powerful, and fallen so low; few other cities have been so shaped and defined by individual imaginations. Rory MacLean assembles a dazzlingly eclectic cast of Berliners over five centuries, from the wild medieval balladeer to the ambitious prostitute who refashioned herself as a royal princess, from the Scottish mercenary who fought for the Prussian Army to the fearful Communist Party functionary who helped to build the Wall. Alongside them we encounter Marlene Dietrich flaunting her sexuality in The Blue Angel, Goebbels concocting Nazi iconography, Hitler fantasising about the mega-city Germania and David Bowie recording ‘Heroes’. Through these vivid portraits, Rory MacLean masterfully evokes the seen and the unseen, in a richly varied, unexpected tour of Berlin’s history. The result is a unique biography of one of the world’s most volatile and creative cities.

Ten real lives, ten photographs, ten journeys in time: the first killing of the Cold War, the dying hopes of a doomed aviator, the ghosts of Native America at Alcatraz, Chairman Mao’s most timid lover, Nature’s final battle with Man. One photograph — or group of photographs — comes from each decade of the 20th century. All belong to the Archive of Modern Conflict. Over the last 25 years the Archive’s small collection of amateur photographs has grown into one of the world’s most moving image treasuries, its shelves now holding pictures of some four million lost lives.

I’ve spent hundreds of hours exploring the Archive’s shelves, opening its manila files, guided by both specific searches and serendipity. Time and again, while holding a handful of black-and-white family snapshots or a single intimate lovers’ portrait, I’ve been moved beyond words – and to words – by the glimpse of past lives, of individuals whom one has never heard of and whose stories can now only be divined.

In this handsome illustrated book, I try to bring those lives to life again. I travel from Siberia to Rangoon, China to Shepperton Studios, hearing forgotten voices that echo from the depths of time, picturing lives that mirror our own, and saving the stories behind these pictures of you.