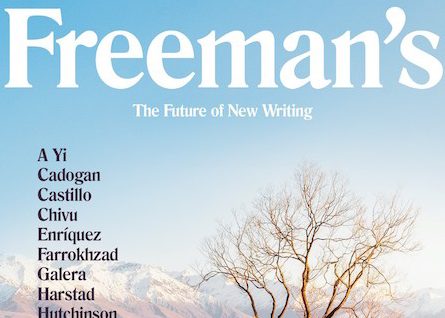 How thrilling to continue our tradition of hosting the Berlin launches of the fantastic literary journal Freeman’s! The new year brings a special edition that asks all the right questions about the future of new writing.

Dissatisfied with the diminishment for literary culture to peer into the future of writing through narrowing confinements of nationality, genre or generation, Freeman’s: The Future of New Writing asks what happens if you take these restrictions off, and start reading across all fields?

The literary journal departs from the series’ progression of themes like Arrival, Family, Home. This special fourth installment instead introduces a list of twenty-nine poets, essayists, novelists, and short story writers from around the world who are shaping the literary conversation right now and will continue to impact it in years to come.

Drawing on recommendations from book editors, critics, translators, booksellers, and authors from across the globe, Freeman’s: The Future of New Writing includes pieces from a select list of writers aged twenty-five to seventy, from almost twenty countries and writing in nearly as many languages. This is a new kind of list, and an aesthetic manifesto for our times. Against a climate of nationalism and silo’d thinking, writers remain influenced by work from outside their region, genre, and especially age group. Serious readers have always read this way too—and Freeman’s: The Future of New Writing brings them an exciting view of where writing is going next.

“The greatest joy of reading for me is how it allows you to go anywhere, to be anyone. There’s an ethical dimension to this permission, though. And in our contentious times, it feels more important than ever to think of writing as a global enterprise, not a national one, and to try to peel back the layers of ageism, sexism, and regionalism which often encrust literary debate in that moment of regarding. I believe once we do that—and read the emerging writers assembled here—the future looks incredibly bright.”—John Freeman

Elaine Castillo was born in the San Francisco Bay Area. Her debut novel America Is Not the Heart will be published by Viking (United States/Canada), Atlantic (UK), and Foksal (Poland) in 2018.

Athena Farrokhzad was born in 1983 and lives in Stockholm. She is a poet, literary critic, translator, playwright, and teacher of creative writing. Her first volume of poetry, Vitsvit, was published in 2013 by Albert Bonniers Fo?rlag (translated by Jennifer Hayashida and published as White Blight by Argos Books). In 2016, her second volume of poetry, Trado, which was written together with the Romanian poet Svetlana Ca?rstean, was published.

Johan Harstad is a Norwegian novelist, short-story writer, play-wright, and graphic designer. His novels include Buzz Aldrin, What Happened to You in All the Confusion?—a Kirkus Reviews best book of the year, which has been published in thirteen countries—and Max, Mischa, and the Tet Offensive. He is also the author of 172 Hours on the Moon, which won the 2008 Norwegian Brage Prize in the young adult/children’s literature category; four plays; a collection of short stories; and a prose collection. He lives in Oslo, Norway.

Ishion Hutchinson was born in Port Antonio, Jamaica. He is the author of the poetry collections Far District (Peepal Tree Press, 2010) and House of Lords and Commons (Farrar, Straus and Giroux, 2016). He teaches in the graduate writing program at Cornell University.

Elena Marcu is a partner and editor at Black Button Books, the first all-female run publishing house in Romania. She is a music junkie, formally the PR manager for a Romanian Independent Music Label. She is addicted to coffee, her headphones, her Kindle and Instagram.

John Freeman was the editor of Granta until 2013. His books include How to Read a Novelist, Tales of Two Cities, and Tales of Two Americas. Maps, his debut collection of poems, is out from Copper Canyon in fall 2017. He is the executive editor at Literary Hub and teaches at the New School and New York University. His work has appeared in the New Yorker and the Paris Review and has been translated into twenty languages.