It’s a new year – and an exciting time to kick off a new literary season!

The Reader Berlin is delighted to celebrate

the launch of Fatin Abbas’ debut, Ghost Season: A Novel.

Join us for the Berlin launch of Ghost Season by Fatin Abbas. A reading, Q&A and conversation between Fatin Abbas and Sharon Mertins will be followed by a book signing. There’s word that there will be a bit of live music too!

Hardcover copies of the book will be on sale for 25 euros, payable by CASH ONLY.

Attendance is limited to fifty people – so be sure to be on time to get your spot!

A dynamic, beautifully orchestrated debut novel connecting five characters caught in the crosshairs of conflict on the Sudanese border.

A mysterious burnt corpse appears one morning in Saraaya, a remote border town between northern and southern Sudan. For five strangers on an NGO compound, the discovery foreshadows trouble to come. South Sudanese translator William connects the corpse to the sudden disappearance of cook Layla, a northern nomad with whom he’s fallen in love. Meanwhile, Sudanese American filmmaker Dena struggles to connect to her unfamiliar homeland, and white midwestern aid worker Alex finds his plans thwarted by a changing climate and looming civil war. Dancing between the adults is Mustafa, a clever, endearing twelve-year-old, whose schemes to rise out of poverty set off cataclysmic events on the compound. Amid the paradoxes of identity, art, humanitarian aid, and a territory riven by conflict, William, Layla, Dena, Alex, and Mustafa must forge bonds stronger than blood or identity. Weaving a sweeping history of the breakup of Sudan into the lives of these captivating characters, Fatin Abbas explores the porous and perilous nature of borders—whether they be national, ethnic, or religious—and the profound consequences for those who cross them. Ghost Season is a gripping, vivid debut that announces Abbas as a powerful new voice in fiction.

“Ghost Season travels that narrow road between austere and gut-wrenching, and does it with incomparable grace. From the first words of this gorgeous novel to the last, Fatin Abbas holds us spellbound, immersed in the lives and the world that unfolds in its pages. Beyond the debris of war and displacement, she reminds us, rests something else that can never be truly extinguished: hope.”

“Immersive and astonishing, Ghost Season brings alive with brilliant specificity the…Sudanese border town of Saraaya, and an unforgettable cast of characters linked by circumstance and fate. Fatin Abbas is a remarkable writer, and this novel an extraordinary debut.”

—CLAIRE MESSUD, best-selling author of The Burning Girl and The Emperor’s Children 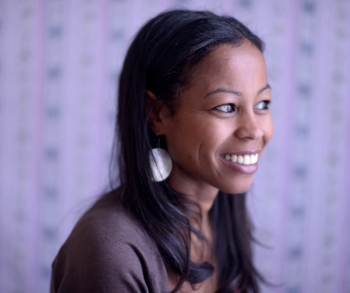 Fatin Abbas is the author of Ghost Season: A Novel, out from W.W. Norton in the US & Canada and Jacaranda in the UK (2023), and forthcoming from Rowohlt Berlin Verlag in German translation in 2024. Her short fiction has appeared in Granta, Freeman’s, The Warwick Review, and elsewhere, and her non-fiction writing and journalism have appeared in Le Monde diplomatique, The Nation, Zeit Online, Kulturaustausch, African Arguments, Africa is a Country, and elsewhere.

Sharon D. Mertins is a fiction writer, co-creator of the Story Strumpets Podcast and Director of The Reader Berlin. Her short stories have been featured in Visual Verse, Cafe Irreal, and Jersey Devil Press among others. She lives in Berlin, where she is working on her first novel.