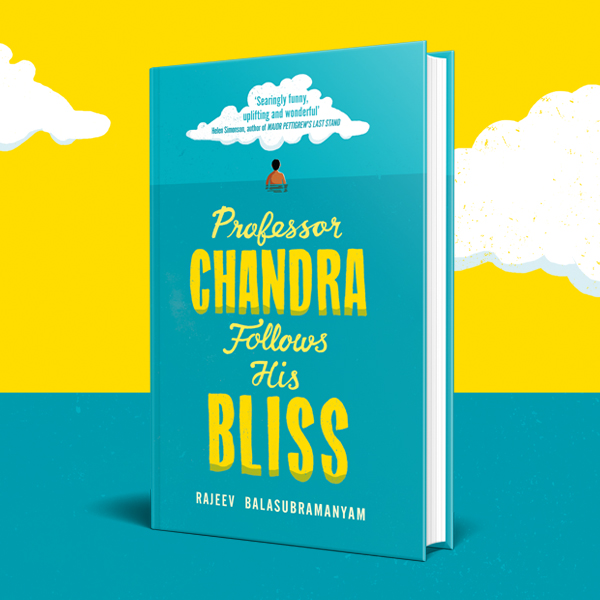 Join us for the hometown launch of Rajeev Balasubramanyam’s new novel, Professor Chandra Follows His Bliss! The evening will feature readings by Rajeev and moderation by Nayomi Munaweera, author of Island of A Thousand Mirrors and What Lies Between Us. Come celebrate one of Berlin’s own, and enjoy a summer evening of words and wine!

Everyone in attendance will be automatically entered to win prizes from Penguin Random House, and copies of Professor Chandra Follows His Bliss and What Lies Between Us will be for sale.

To learn about the Professor, watch the book trailer here. 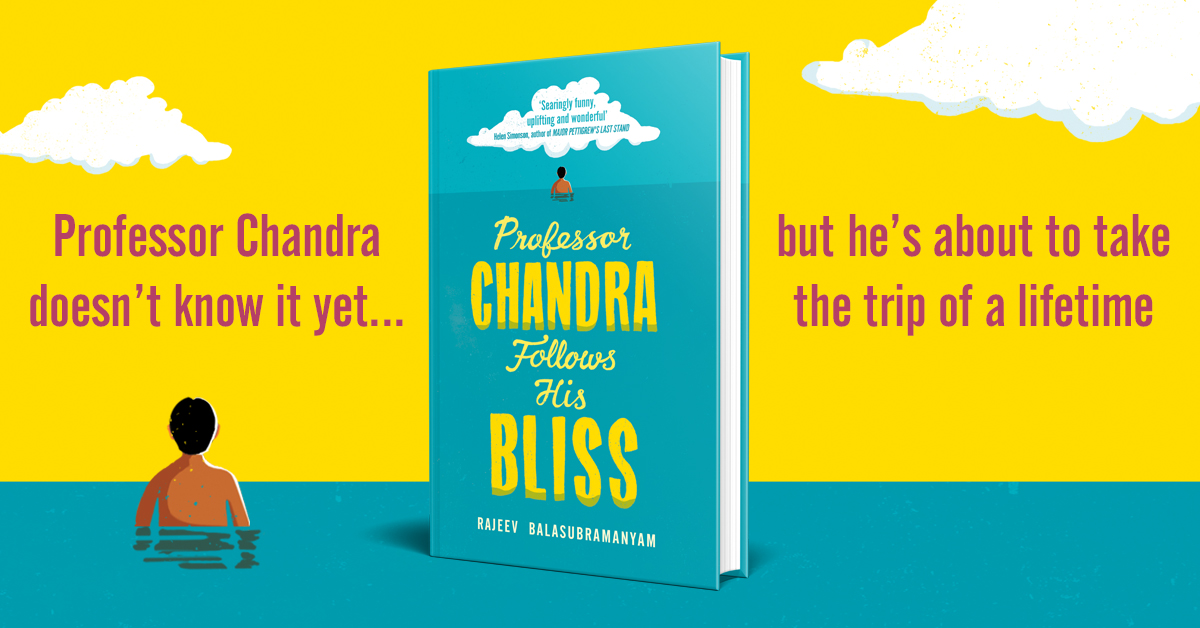 Professor Chandra is an internationally renowned economist, divorced father of three (quite frankly baffling) children, recent victim of a bicycle hit-and-run—but so much more than the sum of his parts. In the moments after the accident, Professor Chandra doesn’t see his life flash before his eyes but his life’s work. He’s just narrowly missed the Nobel Prize (again), and even though he knows he should get straight back to his pie charts, his doctor has other ideas. All this work. All this success. All this stress. It’s killing him. He needs to take a break, start enjoying himself. In short, says his doctor, he should follow his bliss. Professor Chandra doesn’t know it yet, but he’s about to embark on the journey of a lifetime.

“Balasubramanyam knows how to flex irony as if it were another bendable body part…. Professor Chandra is a wonderful character – stodgy, flawed, contentious, contemptuous – yet vulnerable, insecure, lonely, repentent, and ridiculous enough to win our sympathy. Balasubramanyan’s novel is a sort of Christmas Carol for a new age — in which uplifting sentiment comes drenched not in treacle but in potfuls of soothing organic herbal tea.”
—Heller McAlpin, NPR

“Impressively, Balasubramanyam – something of a Zen exponent himself – balances satire and self-enlightenment in his first novel in nearly 20 years – a surprisingly soulful family tale that echoes Jonathan Franzen’s Corrections in its witty exploration of three children trying to free themselves from the influence of their parents.”
—Ben Evans, The Guardian

“Recovering fuddy-duddy Chandra is a droll creation, and his journey of self-realization feels like the real thing.”
—Kirkus Reviews 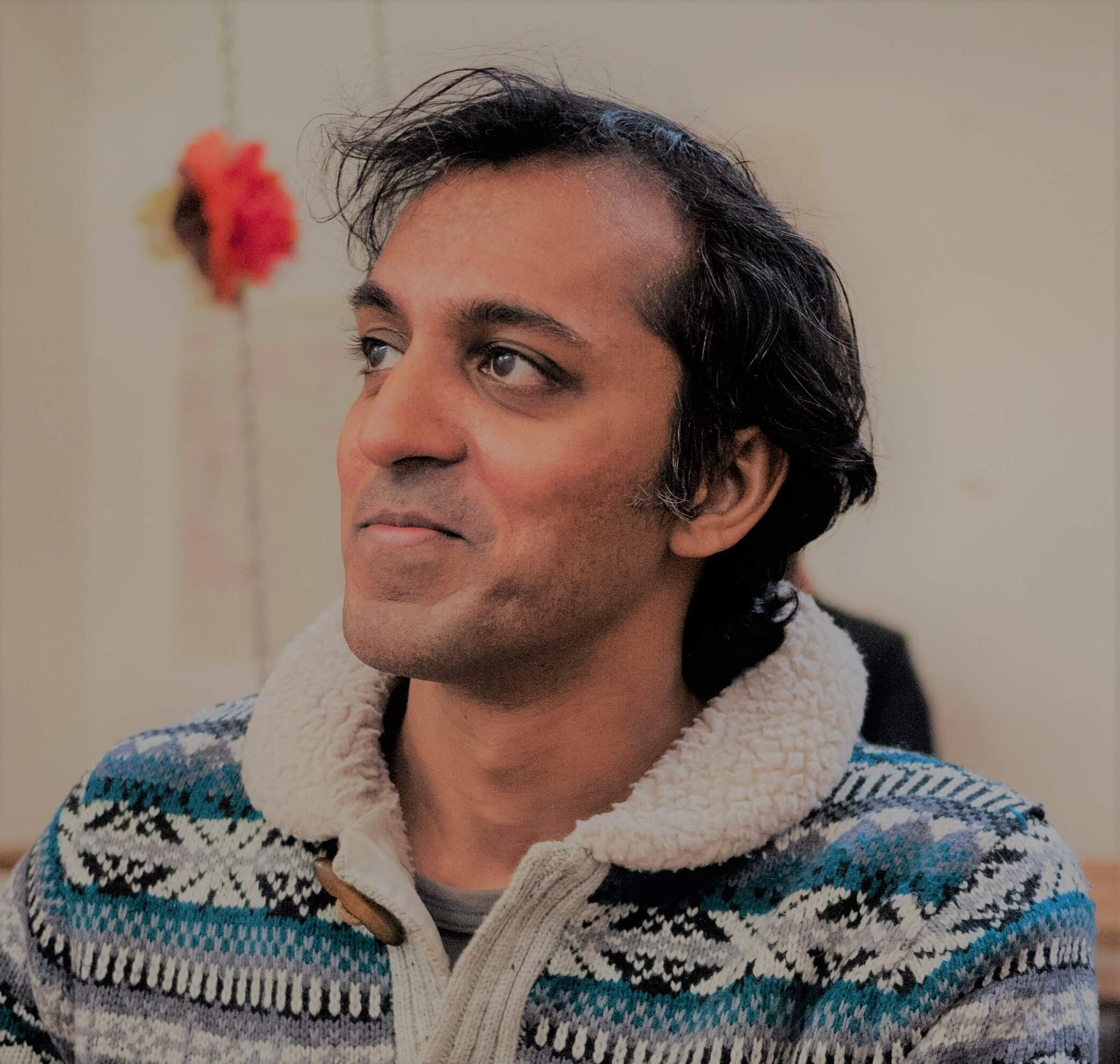 Rajeev Balasubramanyam was born in Lancashire and studied at Oxford, Cambridge and Lancaster universities. He is the author of In Beautiful Disguises (Bloomsbury, 2000), which won a Betty Trask Award and was nominated for the Guardian First Fiction Prize, and most recently, Professor Chandra Follows His Bliss (Chatto & Windus/Random House USA). He has lived in London, Manchester, Suffolk, Kathmandu and Hong Kong, where he was a Research Scholar in the Society of Scholars at Hong Kong University. He was also a fellow of the Hemera Foundation, for writers with a meditation practice, and has been writer-in-residence at Crestone Zen Mountain Center and the Zen Center of New York City. His journalism and short fiction have appeared in the Washington Post, The Economist, the New Statesman, London Review of Books, Paris Review, McSweeney’s and many others. He currently lives in Berlin. www.rajeevbalasubramanyam.com 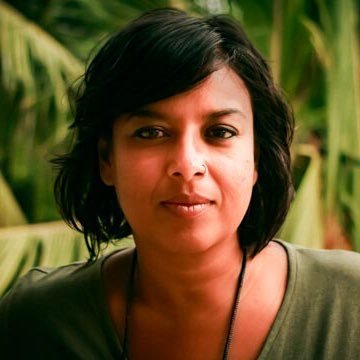 Nayomi Munaweera is a Sri Lankan American writer and the author of Island of a Thousand Mirrors which won the Commonwealth Book Prize for the Asian Region in 2013, and What Lies Between Us (2016), winner of the Sri Lankan National Book Award for best English novel. She holds a MA in South Asian Literature from the University of California, Riverside. She now lives in Oakland and teaches at Mills College and Ashland University.