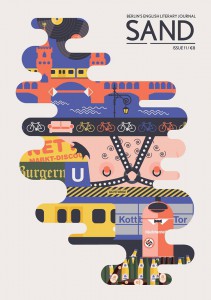 On Saturday April 25th at 8:30pm at 1820BAR, the humanoids behind Berlin’s English literary journal SAND, along with fabulous author and publishing services co-host, The Reader Berlin, invite you to join us as we present SAND Issue 11. Our newest issue, featuring the winning story from The Reader’s short story competition, questions identity.

How much are we defined by the city we live in? We’ll kick off the night with readings from four of our Issue 11 contributors, and The Reader’s Victoria Gosling will present the prizes for the competition winner and shortlisted writers. And then, what else would we do with all you smashing people together in one place?

Event link here.
If you have yet to attend a SAND Launch Party, or you have yet to familiarize yourself with our Partying Protocol, here’s your chance. Come dressed as your favorite Berlin cliché (an Ampelmann seems pretty easy to pull off, oder?). Bring your favorite book of poetry, and we’ll scream the lines into the electric noise of Lana Del Rey remixes, our faces slathered in glitter. Or just come as you are – unprepared, unoutfitted, unglittered. We don’t care what you do. This is your party too. We just want to celebrate words and Berlin with you.
And, hey, you get in free if you purchase a copy of this issue! Otherwise, entry is 3 Euro. See below for our reader and DJ line-up, and we’ll see you on the dance floor.

– Will Studdert recently completed a history PhD at the University of Kent, exploring the ways in which Britain, Germany, and the US used jazz music in propaganda broadcasts during World War II. Based in Berlin for many years, he has written on the city’s football culture for No Dice Magazine and has been the singer of the punk band Zatopeks since 2001.

Fiction:
– Kasia Juno van Schaik was born in South Africa and grew up on the edge of a small desert. After immigrating to Canada, she studied literature and creative writing at the University of Toronto and at Concordia University in Montreal. Kasia’s work can be found in The Rumpus, Maisonneuve Magazine, and The Puritan. In 2009, she received the Quebec Writers’ Federation short story prize. She is currently at work on a book of short stories. She lives in Berlin. kasiajuno.weebly.com.

Poetry:
– a d r i a n n i c h o l s studied dance at the School of American Ballet, the classics at Swarthmore, and law at the University of Virginia. For five years, he practiced corporate law in New York and Frankfurt. He has contributed essays and reviews to Ballet Review since 1993. In 2001, he moved to Berlin to write fiction and poetry. In his readings, he remains a dancer. He and his wife, whom he met reading Baudelaire and Rimbaud at Swarthmore, now have three young children.

– Utz Rachowski was born in 1954 in Plauen/Vogtland, East Germany. He was arrested in 1979 for “subversive agitation,” then expatriated and released to West Germany through Amnesty International in 1980. From 1993 to 1999, he co-edited the literary journal Ostragehege, and since 2003, he has worked as a rehabilitation adviser to victims of GDR dictatorship under the auspices of the Saxony State Commission for the Stasi Files. He received the 2014 Nikolaus Lenau Prize for the poetry collection Miss Suki oder Amerika ist nicht weit.