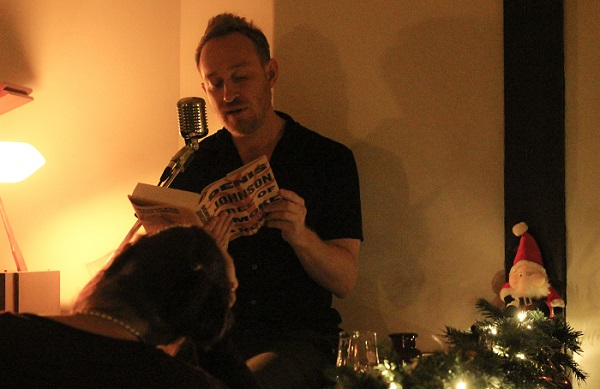 For those of you who couldn’t make it, here is an edited podcast from our inaugural Sunday Salon back in November. It features author Tod Wodicka, writer and pianist Polly Trope and the Reader’s own Victoria Gosling. The theme was ‘Belonging, a home or a lack of one’, not an untopical subject in current times. Tod read us two original pieces of his work, one about traps and fairytales and fires in Moscow, the other from a recent article he wrote for Tank Magazine about losing the plot in Nice while stalking Elton John.

He also selected and some shared excerpts from favourite authors which touched on exile and estrangement, the clarity that arises from being a stranger in a strange place in strange times – although these didn’t make it into the podcast as we are afraid of being sued for copyright infringement. Along with the readings, music, cocktails and merriment, we’d like to salute the three brave writers who came and shared their own musings on the theme. We hope to see you all next time!

TOD WODICKA was born and raised in upstate New York and currently lives in Berlin. His first novel, the acclaimed, ALL SHALL BE WELL; AND ALL SHALL BE WELL; AND ALL MANNER OF THINGS SHALL BE WELL (Jonathan Cape/Vintage, UK) was published in 2007 and has been translated into several languages. The New Statesman pronounced it ‘Vibrant, original, at times hilarious…reminiscent of Philip Roth or Jonathan Franzen (or The Royal Tenenbaums)’. It was shortlisted for the Believer Book Award in 2009. His second novel, THE HOUSEHOLD SPIRIT was published to widespread acclaim in 2015. His essays and criticism have appeared in the Guardian, Granta, the New Statesman, the National, Tank Magazine and AnOther Magazine, among others. He has been an English teacher and recently helped mentor aspiring novelists in the Tibor Jones Writer’s Studio.