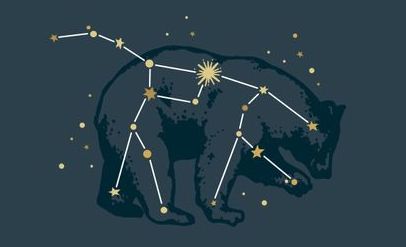 The Ojibwa tribe native to America’s Great Lakes tells of Mishe Mokwa, a mother bear who lived with her two cubs on land that’s now Wisconsin. One day, the bears’ forest caught fire: a raging blaze that drove them to land’s edge, where woods meet water. There, they had no choice but to swim for the other side.

“Michigan” is a French rendition of the Ojibwa “misshikama,” meaning: “big water.”

The origin of “Wisconsin” is unclear. Linguists’ best guess is that it stems from “Meskonsing,” a Europeanized derivation of the Miami Indians’ name for a river, meaning, “it runs red.”

Mishe Mokwa led the way. After a full night and day, she dragged her tired body onto sand. She called to her cubs but heard no answer. She climbed higher, to search the surface of the big water below for any sign.

Bears are raised by their mothers. Bear fathers play no role in bear upbringing.

The sky turned red at sunset. The baby bears had drowned just off shore. Mishe Mokwa’s overwhelming grief moved the Great Spirit, Gitche Manitou, who turned the brave cubs into islands, and covered Mishe Mokwa in a sand blanket so she could rest, forever awaiting children who’d never arrive.

In 2006, a polar bear named Knut was born at the Berlin Zoo. Knut was rejected by his mother, a “disturbed circus bear” named Tosca, so his human handlers took over his care.

Gus was a polar bear in the Central Park Zoo, famous as many New Yorkers are, for his own special brand of neurosis. Gus swam for hours on end, nearly all his waking day at times, fueled by some obsession his keepers couldn’t pinpoint.

In German, another word for zoo is “Tierpark” (“animal park”). Berlin’s Tierpark is housed within a park called the “Tiergarten.”

Elizabethan London had a Beargarden, where, to the delight of large audiences, bears were tied to stakes and attacked by dogs or whipped until blood ran down their bodies.

Gus was famous for his swimming. People came from all over just to see it. Knut, too, was famous—a star.

Today, the great sand bluffs on the Michigan coastline across from North and South Manitou Islands are a popular tourist destination, known as Sleeping Bear Dunes National Lakeshore.

North and South are relative terms—deictic words, like “here” or “you.” Here could be anywhere. You could be anyone.

Stars tell stories, the distance between their dots, connected.

SARAH VAN BONN is a British-American writer living in Berlin. Her work can be found in The Common, The Southampton Review, The Rupture, The Boiler, Vol. 1 Brooklyn, Hobart, Columbia Journal, and other lovely venues. Equally committed to fiction and nonfiction, she’s currently at work on a novel and a collection of essays. “On Bears” is a circle-shaped essay-constellation, and like any good skyscape, it is still expanding. Find more of Sarah’s work or get in touch/send her your bears here: sarahvanbonn.com.