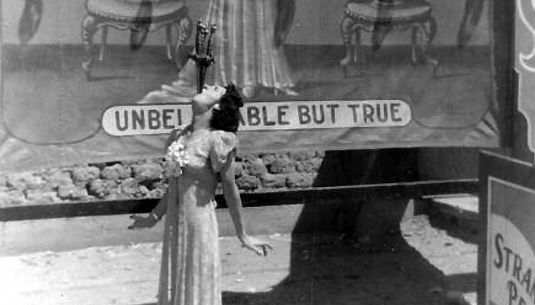 After you admitted your fear of ketchup, the perverse side of me went to Dépanneur Ultra and bought a family pack of ketchup chips. You have to be raised in this country to desire those lurid furrows of salt, stained deeper than other flavours, so you know where to lick. I am a hummingbird this way, drawn to red crannies you needle your tongue into. That was not meant to be a sexual advance, though you’ll probably read it that way. The perverse side of me is called, “Délphine,” by the way. I pronounce her name in a rush of breath, like I pronounce all French: intimately. Délphine wanted to bring the ketchup chips to practice, but in the end I hid them in my trailer sealed with a plastic spiral hair tie.

If you want to picture me in my trailer, you can imagine the trapeze artist in Der Himmel über Berlin. Beautiful and idle, listening to records on her Murphy bed. I peel my leotard with care and step into my mother’s kimono. You asked if it was silk that time, and I didn’t know. I said I didn’t treat it like silk. The fabric still smells of frankincense and cat litter.

Five evenings a week, I steam at the Y with my trainer, who is your grandmother. She sits opposite me, but we do not talk. If I didn’t know her, I’d think she was a middle-class meth addict. Meth addict because she’s so skinny, though I don’t know how that particular stimulant impacts your appetite. Middle-class because she takes a jar of coconut oil into the room. She presses it to the vent when the vapours churn out and shakes the melted oil onto her shins. She also wipes a kernel of oil onto her teeth and sucks it, which is a method called “oil pulling,” and I don’t want to know any more about it than that. While she’s sucking on the oil, she unhooks and re-hooks her jaw. Every ligament in her body has this potential: of dislocation.

Your grandmother wishes I were more like her. Sometimes she raids my trailer for evidence of grain. The ketchup chips do not count as grain, but she would be displeased to see them. She taught me to buy tahini because I like it less than peanut butter and would eat less, in theory. Now I prefer tahini. I remove the labels before I place the jars in recycling so I can tell her it’s dijon mustard, which is allowed, even if I buy the kind with grains. Last week she found a box of pitted dates and asked how many I ate that day. I said two, though I had eaten seventeen, sucking on them as lozenges. She said, I’m not body-shaming but can’t you take up smoking?

Eliza Robertson is a writer and astrologer based out of Montreal. Her 2014 debut story collection, Wallflowers, was shortlisted for the East Anglia Book Award, the Danuta Gleed Short Story Prize, and selected as a New York Times Editor’s Choice. Her first novel, Demi-Gods, was a Globe & Mail book of the year and winner of the 2018 QWF Paragraphe Hugh MacLennan Prize. She studied creative writing at the University of Victoria and the University of East Anglia, where she received the Man Booker Scholarship and Curtis Brown Prize. In addition to being shortlisted for the CBC Short Story Prize and Journey Prize, Eliza’s stories have won the Commonwealth Short Story Prize and 2017 Elizabeth Jolley Prize.