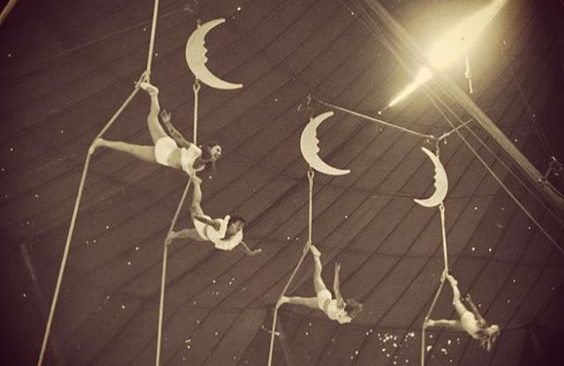 S.K Perry was selected as the winner of the 2019 Berlin Writing Prize for her entry A Wide Neon Yell. Excerpted here, the short story explores the themes of sisterhood against the backdrop of a circus family tradition known as the hair hang. As the winner of the first prize, the author will be joining us in Berlin in January 2020 for a month-long residency at The Circus Hotel. The full story will be featured in the 2019 Berlin Writing Prize Anthology, The Circus, forthcoming from The Reader Berlin in partnership with KLAK Verlag in 2020.

Picture this: a cord hangs from the arena ceiling. At the end of the cord is a metal loop, and all around the loop is my sister’s hair. The method by which her hair is attached to it, is a family secret. To an audience, it looks loose and accidental but underneath it’s plaited super tight, in a closely-guarded sequence of knots and twists that take nearly two hours to put in. I know, I’ve done it.

So her hair’s attached to the loop, and she’s attached to her hair, obviously, and so she makes this one long line from her pointed feet right up to the roof. My sister starts the act with floor work. She dances, the cord moves, and it looks like she’s being pulled by it. She makes her limbs trail like perfume leaking after a body. She’s the swing tip of a pendulum, and for the first hundred and seventy-seconds, she drapes from the moving cord, elegant as aroma drapes, in a soothing, beautiful trance.

I’m used to meeting up with my sister in hotels. She was a working performer from the age of fourteen; it’s been that way our whole adult lives. I tracked down wherever her troupe were performing, and stayed a few days in whatever accommodation she had.

I’d say she lived nomadically, although this is a metaphor because -of course– she’s never searched for pasture. That’s the original meaning of the word ‘nomadic’. ‘Pasture’, if you don’t know already, means grassland.

A hundred and seventy-seconds into the act, my sister’s body is pulled from floor work into the sky. Hold in mind that this is the opening act. It’s not like the audience are expecting fireworks right away, so the tug at the centre point of the pendulum swing is unexpected for most of them, and she stays all limp-looking as she ascends. This gives them time to notice it, and they point and whisper to each other; hey! she’s hanging from her hair.

They watch her -breath held- as the loop she’s braided onto rises fast towards the ceiling. The music at this point is soft, like you’d expect on a make-up advert set in Paris, but it starts to catch and shake around itself as though the track’s stuck. Then it cuts out, and my sister –high up in the roof- judders.

Today, we’re both in Amsterdam -not for one of her shows- for our parents’ anniversary. I suppose staying in her hotel room is simply a habit at this point.

My sister said to me once that all words are metaphors, so the matter of whether she’s truly nomadic or not is a moot point. I think this is true for some words more than others. For example, ‘grassland’ is a compound noun meaning land with grass on it, and that doesn’t seem at all metaphorical to me. It’s just a small thing, related to the philosophy of language and not at all to real life, but I remember my sister and I arguing about it in a disproportionately urgent way.

I arrive at her hotel around 3pm. Our mother told me where she’d be.

S.K. Perry is the first-prize winner of the 2019 Berlin Writing Prize. Her debut novel, Let Me Be Like Water (Melville House), was the City Reads’ Brighton Festival Big Read and was longlisted for the Ondaatje Prize. Amongst other things, she’s worked in social justice, education, and campaigning, and is currently a Digital Engagement Fellow at The Sociological Review. Sarah is in her second year of an AHRC-funded PhD at Manchester Metropolitan University, where she’s researching depictions of sex in literary fiction with an intersectional feminist lens. Sarah lives in Leeds and tweets @_sarah_perry.