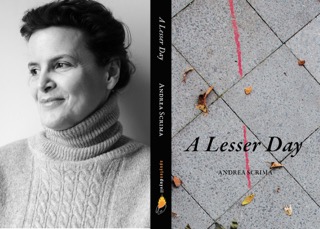 Join American author Andrea Scrima for a reading from her critically acclaimed novel A LESSER DAY, which describes an artist’s life between continents and cultures in what now seems like a lost world: pre-gentrification New York and Berlin of the ’80s and ’90s.

Reading and discussion will be moderated by Madeleine LaRue, Associate Editor and Director of Publicity for the magazine Music & Literature.

Here are the details you need to know:

Wednesday 23rd May at 7pm sharp!

The Wintergarden (towards rear of Common Ground on the ground floor)

*Please note that although this event is free, RSVP is essential as space is very limited. Contact hello@thereaderberlin.com to secure your place now!

The East Village of the early eighties; West Berlin in the shadow of the Cold War;Brooklyn approaching the end of the millennium. Andrea Scrima’s A Lesser Day describes an artist’s life between continents and cultures in what now seems like a lost world: pre-gentrification New York and Berlin.

The narrator, a young art school graduate, gets by checking coats for an uptown martini lunch crowd while her friend works in the peep shows of the West Forties; when she eventually makes her way to Berlin, she sets up her studio in an empty factory space near the Wall. Vignette-like descriptions of characters for the most part barely subsisting on society’s fringes alternate with moments of wider historical significance; narrative threads are interrupted, picked up again later, or abandoned entirely, interspersed with passages that explore the mechanisms of memory and repression. Addressing a continually shifting “you” in a search for emotional understanding initially directed at the narrator’s dead father and then merging into a blur of intimate others, little escapes the author’s scrutinizing eye as she locates meaning in the passage of time as it inscribes itself into the myriad things around us: the mute, insentient witnesses of our everyday existence.

A narrative kept closer than a secret, oozing in slow, soft, whispers . . .  The work is delicate, yet naked and unapologetic, and our collective consciousness  is greater for Spuyten Duyvil publishing this small, wondrous book.

The book’s mission is awareness, seeing . . . in the end, it is hard not to cheer on a mind so intent on  reclaiming meaning from the abandoned, the forgotten, and the mundane.

A LESSER DAY is poetic, disturbing, elegiac, visceral, and beautiful. Scrima paints vivid, detailed memories of places to evoke a web of intimate relationships that emerges gradually from a temporal fog into shocking, unforgettable clarity.

On the German edition:

It’s the small observations that make life what it is, because these are the things that determine our subjective perception of reality—and not the momentous events of history, the outside world. The aesthetic at work here lies in the ordinary, the everyday. In one of the novel’s most poetic sections, the protagonist becomes witness to the moment before the coffee trickling out of a discarded paper cup and a thin stream of dog urine converge on the street, in the precise spot where a slip of paper with an address on it has fallen, which she salvages in time. The thought that she was the only one to perceive the magic of this moment, these “three factors mysteriously interconnected in an equation meant for me and me alone,” induces a kind of vertigo—“and yet I understood nothing, nothing at all.”

“Everything I see around me, everything I touch: the chair I am sitting in, the paper I am writing this on, none of it is as ephemeral as I.” The narrator of Wie viele Tage takes her ambivalence, her “difficulty with the present tense” as the departure point of a quest in which writing becomes a means of merging with life. In her mind, she need only open a drawer in the old kitchen cabinet on Staten Island or imagine the Italian language primers from school or remember how, “in this vast empire of our childhood,” she invented “scientific facts” about the universe for her brother, and already the figures are set into motion, and it’s as though they could interrupt the narrator at any moment—that’s how alive they become in this writing’s imagery. This is a high art, and it testifies to the richness of a book that succeeds in freeing itself from any concerns of self-assertion to create a space in which the reader indeed begins to think more precisely, see more clearly—and become more receptive and sentient.”